As developers, we’re used to saying, “It works on my machine.” A decade ago, this phrase was reserved for snarky conversations with your friendly quality assurance person or the product owner who is testing a feature.

As our technology tooling has become more advanced (read: more complex), I’ve seen it come up as inter-developer conversation, frequently between a frontend and backend engineers: 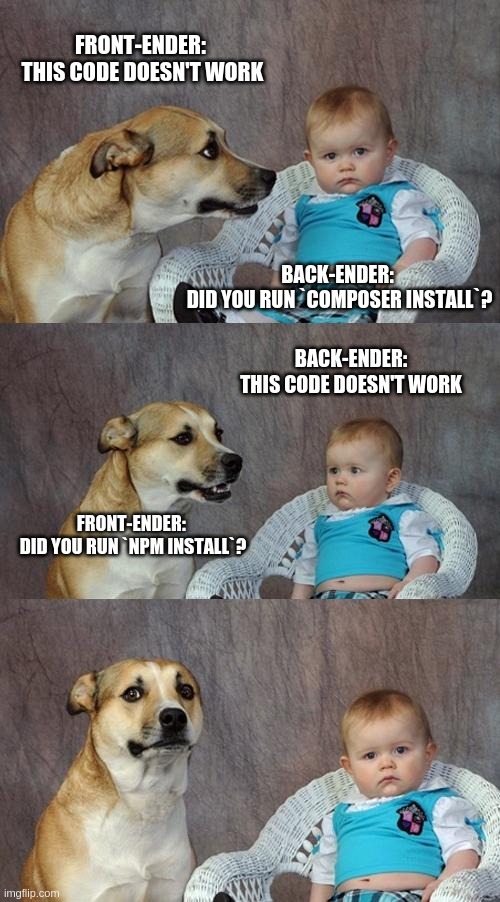 Composer and Node package manager (npm) are the de-facto package managers for PHP and JavaScript. We use them every day at WebDevStudios. Let’s help each other get to know their similarities and their differences, as both tools can do unexpected things that you may not realize.

While initializing a project isn’t the most common command, it’s useful to cover it first; in case you want to try to initialize a Composer or npm project in an empty directory.

Composer will interactively ask you some questions about your PHP project including: package name, description, package type, etc. Newer versions of Composer will prompt you to add the vendor directory to your .gitignore file. You should do this!

npm has the came command:

It will also interactively ask you a few questions about your JavaScript project including: package name, description, license, etc. After gathering this info, it will create a package.json file.

You can instead create a package.json file yourself. A minimal package.json is just {}, but npm will warn you if you don’t have these fields:

For the npm package name, it’s a good idea to add a scope using the @ symbol, your organization name, and a slash before the package name. While it’s not required like Composer’s vendor name, it will help group your packages together.

npm does not offer to create an entry in .gitignore for the node_modules directory, but you should.

You can validate your composer.json file format by running:

I recommend not including version in your composer.json. It’s just one more thing that developers will forget or ignore. Let your version numbers be managed through tagging in your version control software.

Both Composer and npm use the same license strings. A license entry is not strictly required, but both will print a warning, if you don’t include it.

I’m getting a little ahead of myself because we’re going to talk about npm install before the Install section below, but just bear with me. In Composer land, telling it that your project relies on a library is done by requiring it.

This will instruct Composer to add an entry to the require section of your composer.json file, install the package (usually in a vendor directory), and create and/or update a composer.lock file with info about the version it installed.

npm does the same thing, but with their install command:

This will instruct npm to add an entry to the dependencies section of your package.json file, install the package (in a node_modulesdirectory), and create and/or update a package-lock.json file with info about the version it installed.

You may have PHP or JavaScript dependencies that are only needed for development, and aren’t needed to use your project when it’s deployed. You can specify that those packages are installed as development dependencies:

Both Composer and npm can require specific versions of a package:

If you omit the version number, they’ll both specify the latest stable version with a carat (^) pre-pended. If you require lodash via npm, it will specify "lodash": "^4.17.20" in your package.json file. This means if you were to tell npm to update Lodash, it would upgrade to newer versions up to the next major version—5.0.0. If you ever get unexpected results from version numbers, you can use these excellent semantic versioning (semver) tools to test:

As the “Dad Joke Dog” meme explains above, the most common command to run is install.

Running this in a folder that has a composer.json file will instruct composer to read that file (along with composer.lock if present) and install any requirements specified.

Usually packages will go into a vendor directory, next to the composer.json file.

Running this in a folder that has a package.json file will instruct npm to read that file (along with package-lock.json if present) and install any requirements specified.

To install packages without the development dependencies, like you would for a production environment, run either of these commands:

This will skip installing require-dev or devDependencies for Composer or npm (respectively).

This is one of those sections where I like to ask:

Are you sure you want to do this?

I like to ask are you sure because when you don’t supply any arguments to update, Composer and npm have the potential to make a lot of changes that you may not have intended. Both will use the version constraints to update your specified dependencies (including dev dependencies) and it will update the child dependencies of the packages, too. So, if your version constraints are fairly “loose,” a lot of stuff is going to get updated, possibly some things you didn’t intend.

A more focused approach would be to upgrade one specific package, not all of them. Like this:

If you’re curious what is out of date, and what would be updated if you ran the update command without any arguments, you can run an outdated report instead:

You can do the same thing with npm:

It’s good to make sure you know what that command is going to do before you do it, so you don’t have to undo things you didn’t want to happen. 😬

Are there any other commands you use often that I missed? Let us know in the comments.

END_OF_DOCUMENT_TOKEN_TO_BE_REPLACED

Jamstack Conf is a two-day celebration of the next generation of web apps, where the JAMStack community and ecosystem come together to learn, connect, and create. Conference attendees range from frontend and full-stack engineers to web agencies, all ready to push the boundaries of...

END_OF_DOCUMENT_TOKEN_TO_BE_REPLACED

WordPress block development can be daunting. It’s already intimidating enough that you need to know ReactJS, you also need to install and configure tools like webpack, Babel, and ESLint. Here at WebDevStudios, we like to build things; and we love to do so conveniently...